It seems like most of the country has been overwhelmed by winter weather, the east coast in particular this year. We have had random 60-70 days quickly followed by rain and snow and ice. This of course means lots of sick people, random snow days followed by days which you can wear flip flops and tank tops.

Today was one of those odd days, supposed to be 75 in Virginia but it was overcast and windy so it felt cooler. LG (Little Girl) compensated by putting together a crazy little ansamble which included hand-knit hat and a random scarf. We played outside about half of the day and as it got later the cooler weather crept in. LG’s been loving her ukulele and we play together as often as we can!

She’s wearing my Back to Basics Winter Hat (free pdf downloadable pattern!) that is tried and true and she’s holding my lovely Kala Tenor ukulele as she likes to steal it from me as often as possible despite it being far too big for her.

Here she is many hours later, walking around the neighborhood with HER ukulele! 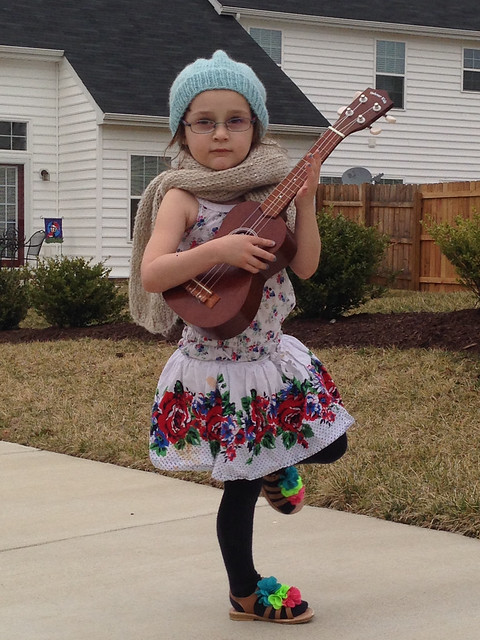 She’s so cute I could eat her up! We stayed outside for a long time in the afternoon. She went into the house and pulled out a blanket, a big stuff doll and some tiny teacups and other odd things and made a little “party” in the grass. This apparently tired her out so much that she fell asleep next to me in bed while her big sister and I watched a movie. Easy bedtime makes this mom happy!